Despite not attending an official workshop last year, Allison and I met toward the end of 2013 to map out some new and updated goals for the coming year (see how I did on my 2013 goals here). Now that 2014 is drawing to a close, and our 2015 goals in progress, I want to look back on this year’s goals to give a little recap.

[Editor’s note: I had 27 mini goals for this year — many of which I did not meet — and what appear below are amended for clarity and mostly focus on the successes.]

CAREER:
I write one essay per month. I submit my essays for publication (blogs or otherwise).

I did not meet the one-per-month quota, but I did submit one of my stories to a journal. And (big for me!) I was more open in letting those close to me read my work, which is often tougher than releasing it to the Internet at large.

Also, I had the honor of writing another pep talk for Allison’s NoExNo project, which received stellar feedback. The more people I can get on the Zero Fucks bandwagon, the better.

I attend one of the “Shut Up and Write” meet-ups.

Done! And I even upped the ante by enrolling in a six-week Creative Non-Fiction class, taught by Janna Marlies Maron, one of the Shut Up & Write organizers.

I get comfortable and confident swimming laps (can swim 20 laps effortlessly).

Sidelined for RUNNING! Despite starting the year with a broken foot, by March I was running again. And by July I was almost winning trail races (haha, but sort of).

Haley and I also completed a bike ride from Midtown to my office in Rancho Cordova. At 26.2 miles round trip (a bike marathon!), it was the farthest I’ve ever biked consecutively.

I use my journal to write about positive things. 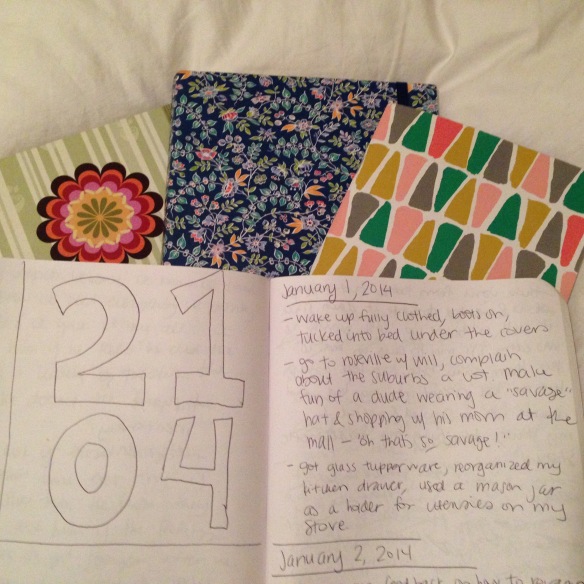 This is probably the goal I’m most proud of for keeping this year, and also that had the most overarching effect. I’ve kept a diary since I was exactly nine years old (thank you, whoever gifted me my first diary for my birthday that year).

I used to have pretty cut-and-dry entries (February 23, 1996: Today we watched our family life video. Our family got a new couch.), which melded into angsty teenage lusting (October 6, 2002: You know what? I’m really getting tired of having virgin lips. You know — never having kissed anyone.), and then college-era existential musings (February 8, 2007: Everyone is so individual it is amazing humans coincide at all.).

After college, I got out of the diary habit, only turning to it when I was upset about something. While it was certainly a good way to work through my feelings, I found myself focusing on the depressing.

So, this year, I avowed to keep an “awesome” journal, cataloguing every fabulous, smile-inducing thing that happened to me each day. And, guess what? I did it! Sometimes I got behind, but I always caught up, and now I have a year’s worth of amazing things to look back on.

I actively introduce myself to people I meet

The introvert in me had a really difficult time with this (per usual) and I wasn’t as good at this one as I hoped.

I read at least 12 books and start going to the library again.

Done and done. Joining a book club helped significantly with this goal. I surpassed it!

CONTINUING GOALS:
I maintain my weekly get-together with girlfriends.
HAHA Happy Hour merged into Bourbon Babes when Haley and I realized our mutual desire to always drink good bourbon but not always pay for it. Cheers for communal bourbon!

Had a secret I submitted posted on PostSecret one Sunday this year.

Shhh! (Spoiler alert: it’s not one of the below.)

Toward the end of 2012 I was lucky enough to attend a goal-setting workshop held by Lululemon. I had never done anything quite so official and written out before, and it was eye opening to spend focused time thinking about what I want and how to get there.

Even though I didn’t think about my goals as consistently or as focused-ly for the rest of the year, they were lingering in the back of my head, inspiring me one way or the other.

I revisited them recently and was surprised to see how many of my one-year goals I did make progress on or accomplish.

Now it’s time to sit down and think about my one-year goals for 2014 but, before I do, let me recap for the year at close.

I have a job with better pay and less stress (still in something I love).

By some miracle, and with minimal effort, I accomplished this — what I thought would be the most painstaking and time consuming one of all to do.

Now I even have my own nameplate:

And sometimes I fly to work!

I write one essay per month.

While I did not meet the quota for this, I did write considerably more, and also got back into reading regularly, which helps inspire my writing.

I also went public with one of my essays for the first time, which was quite cathartic (and it was great to receive such a positive response!). I contributed it to Allison’s NoExNo project, and you can read it here. The photo below relates to it, I swear.

I attend monthly writing workshops with Allison (and/or others).

We were actually pretty good about doing these! Having the writing workshops correspond with wine/pizza parties helped considerably, but who’s counting?

Here’s what we look like if we haven’t had our daily allotment of pizza. I mean, writing:

I post three blog posts per week (any blog) and promote one of them.

NOPE. Didn’t happen. But, I did switch all my blogs over to WordPress and think about them sometimes.

I incorporate fresh veggies into my own cooking twice per week.

I finally made it to the Midtown Farmers’ Market at the end of November. Not that that means I didn’t eat fresh vegetables until November, but it does give a little insight into this goal: kind of happened, kind of didn’t.

Here’s me after chopping some vegetables, to prove to you I am capable: 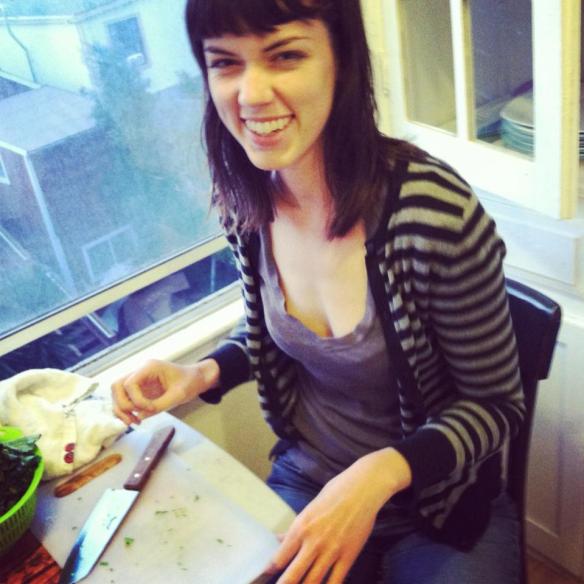 This plan got foiled by the fact that I jumped over a hedge and broke my foot. So, instead of a picture of me gloriously defeating Sarah Palin, here’s a pretty gross picture of my foot:

I walk instead of drive three times per week.

When I was working downtown, I started biking to work every day instead of driving — it was actually a quicker commute! Now that I work farther from home, I no longer bike to work, but I still make a point to walk to meet up with friends, do my shopping, etc.

I also decided to get safe about it after I saw a bicyclist get smashed by a truck, and I bought a really sweet bike helmet. I know I had a really nerdy picture of me in said bike helmet, but I can’t find it on my computer, so this photo of me biking into the sunset will have to do:

I save 5% of every paycheck.

I did this, but I can’t really prove it to you without showing you a screenshot of my bank account, so you’ll have to take my word for it.

Here’s a really awesome graphic of a sloth as a consolation prize: 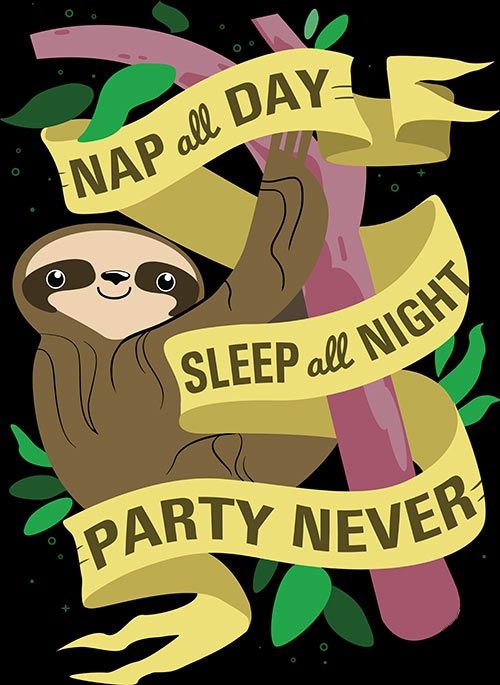 I take a full week off work for vacation.

Glad I got this one done when I was still working a job that gave me paid vacation time. I spent a week in Ohio and Kentucky and checked two Capitols off my bucket list! 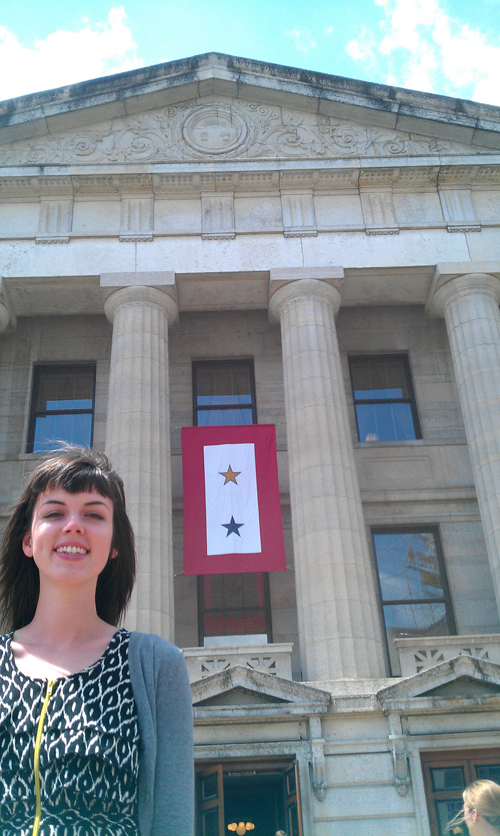 I buy one piece of original artwork (that I love).

This one was seemingly the easiest on my list, but I didn’t start on it until I had an epiphany a couple weeks ago and commissioned Dan Simmons to create a handlettered art piece out of the haiku Jamie Stewart wrote for me: 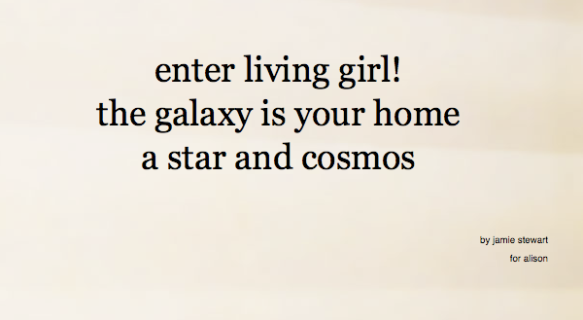 I attend a regular weekly get-together with my girlfriends.

Haley, Haley, Allison, and I started HAHA Happy Hour in early January 2013 and it has been going strong throughout the entire year, and even grown to include ladies not named Haley or Al(l)ison. What a great tradition. Here’s the founding pinky swear:

Cheers to another great year!

There was an error retrieving images from Instagram. An attempt will be remade in a few minutes.

Official Website?
Bourbon Babes
A Run For All Seasons
Not Very Pretty